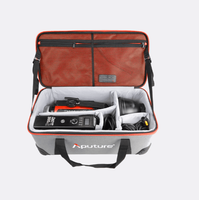 300d Mark II outputs a whopping 20% more light than its predecessor. When combined with the Fresnel 2X, the 300d Mark II can produce up to 90,000 lux, approaching the luminance of a 575W HMI.

The new yoke allows for 360° of rotation, and when combined with the handbrake locking mechanism from the 120d Mark II, you’ll be able to secure the light in any position, with any modifier.

The 300DII control box is completely silent, composed of aluminum alloy, a built-in antenna, and military-grade paracord strap. It also is the first light to feature the Aputure Quick Release Plate and Clamp, allowing it to securely attach to any stand, truss, or speed rail.

With 0-100% dimming control, the 300d II can be used in low-light environments or to overpower the sun; featuring 4 different dimming curves: Linear, Logarithmic, Exponential, and S-Curve.